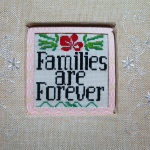 Today’s Friday Finish is a photo album cover I made for Christmas several years ago now. With this project I attempted to do something unique with the finishing for the first time. I can be very generic and prefer to keep projects in hoops or frame them, but this piece I carefully measured and stitched to fit in the hole where a cover photo would normally go!

Name of Piece: Families Are Forever

You can find this chart for yourself here: Families Are Forever Cross Stitch Chart

END_OF_DOCUMENT_TOKEN_TO_BE_REPLACED 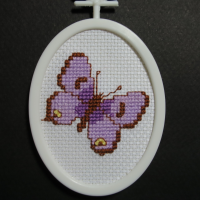 Today’s Friday Finish takes me back… I finished this project a long time ago. It was my first project that I did Five Minute Stitch videos on, and it was the first project I decided I would take progress pictures on!

Distributed as a kit by Janlynn under their “Design for the Needle” series.

END_OF_DOCUMENT_TOKEN_TO_BE_REPLACED

This time last year, I wrote my New Year’s Stitching Resolutions for 2013. A whole year has passed since then. It’s time to review the old goals, remove some, add some, and generally reflect on 2013 and the new year to come!

I actually wrote a Progress Report on this a month or so ago… I haven’t quite come up with a solution to the problem, but I do know that I decided not to work on the sampler anymore for the reasons listed in the article. So this is definitely a goal that’s not making it onto the new list!

Complete All My Mother’s UFOs

This is still a semi-goal… it’s not as important to me as it was when I made the 2013 list. A lot of the pieces are stained and/or they are very large projects, so not only will I need to start over on several of them – and they aren’t things I particularly enjoy stitching – but they’re large projects and I don’t do large projects. There are one or two that are small and in great shape, and I’d love to complete them! But the rest… not so much. This goal will be modified to be some and not all!

Sort and Organize My Stash

I think I can honestly say, I completed this goal this year! There were some tough times, as I moved twice over the course of the year and each move the amount of space I had for my stash got smaller and smaller, but I have managed to organize it to two shelves on a bookshelf! I’m planning to do a Random Corner article on what I did and how I sorted it, and I bought a few new things to sort it even further! But I’m happy with the system I have now. Goal complete!

This goal surprised me… but I have found for certain kits, I really do enjoy stamped cross-stitch! A new thing I’ve done this year is start embroidering pillow cases and hand towels, because of the Salvaged Stash I discovered early in the year. It’s still difficult for me to do, but I feel like my skill has improved since I’m more used to stamped cross-stitch, and the finished product looks better than my first few attempts. I’ve even found myself looking to do more stamped kits because I enjoy the pillow cases so much. Goal complete!

Complete Charts Instead of Kits

Well, I didn’t complete this goal. Every project I’ve done not from a kit, is one I’ve designed myself. Wooper Love, the Game of Thrones iPhone Case, and both gifts for my nephew (articles coming soon!) were all things I designed myself. I have bought a few cross-stitch magazines since I started working at Joann’s, but I’ve had so many other projects to do I haven’t looked at any to start! But I’m not so concerned about it now. There’s so much to do, it’s best to stitch what you love instead of worrying about stitching something else. I don’t think this goal will make it to the new list.

And that was it for last year’s list! Out of five goals, I completed two, modified one, and dropped two, so that’s not the best record. But I completed ten projects in 2013, which wasn’t a goal, but that’s quite a lot of projects! I am satisfied with how the year went, even if the goals didn’t fare so well. 😉

This goal must have not been a very big deal last year, since I didn’t have it on the list! But over the course of 2013 I’ve started and stopped a number of projects I really want to finish. (My Progress Reports are a testament to that! I don’t think I finished any of the ones I wrote articles on!) My list of UFOs went from one or two to over a dozen. My goal for 2014 is to complete as many UFOs as I can!

Bringing this down from last year’s list to this one, like I said above, I would like to complete some of my mom’s UFOs – but not all! That’s the main difference between this year and last year.

There will be an article on this in the coming weeks, but there were a few presents I was stitching for Christmas that didn’t get finished. I had too many other things to work on along with my job, so I ended up giving an IOU to people instead with a picture of what the finish will look like. Those pieces now have top priority! (I say that about every piece but it’s the truth!) If this goal isn’t completed by next year I will be very disappointed. It’s like a guaranteed complete!

I know I say all the time how much I dislike large projects and how we don’t get along, but I do have a lot of large projects in my stash that I really want to do! Out of the dozen or so I have in my stash, I would really like to finish at least one in 2014! That way I can say I did it. And maybe even learn to enjoy large projects in the process…? I doubt it though.

And finally, to round out the list with yet more projects I would like to do… I’ve done a Cat-Themed Rotation (which I am still working on), but I mentioned about halfway through the year that I would like to do a bear or teddy bear-themed rotation as well! And throughout October and November I found lots of bear kits to do and added them all to my stash. In the new year I would like to start a Bear-Themed Rotation, and hopefully have a bit more success than I did with the cat-themed one!

And that’s it for my 2014 New Year’s Resolutions! When we revisit this list in 2015, I hope they’ve all been completed and accomplished! What are you looking to accomplish with your stitching in 2014?