So what is Salvaged Stash? Basically, I have a goal to Save the Stash from the Trash, and over the last few years I’ve saved several finished pieces from being thrown away or ending up being used as scraps or storage items. I want to share them with you all, and raise awareness of what happens to these finished pieces over the years once they’re finished being stitched. And remember to save the stash from the trash!

Anyway, our first Salvaged Stash piece is a thriller! It’s not the article I planned to start with, but some new developments made me incredibly excited so I wanted to get this one out first.

I very briefly worked at a thrift store at the end of last year, and while I worked there we got a lot of donations of a lot of different stuff. (Which happens with a thrift store, we got stuff out of people’s garages and basements and all kinds of things.) At one point someone donated boxes of glassware to us – cups, vases, plates, decorative pieces, lots and lots of glass. As we unpacked the glasses, I found some that were wrapped in cloth instead of newspaper. I don’t remember the glasses in the cloth – I think they were just plain glass, nothing special – but when I unpacked them and looked at the cloth, I realized they were cross-stitched pillow cases!

Cross-stitch pillow cases are nothing special – you can buy kits at Joann’s and Hobby Lobby and Michael’s – but at the time I’d never seen pillow cases like these, and I got really excited. I couldn’t believe someone has tossed them out to be used to wrap glassware in. It honestly upset me a little because the pillow cases were gorgeous, but they were covered in stains and dirt from wrapping the glass and sitting in a dirty old box in someone’s garage. I didn’t know if I’d be able to wash the stains out, and if I couldn’t, how was I going to use them? I wanted to put them on my bed but what would people think seeing these discolored, stained pillow cases on my bed? They wouldn’t see the cross-stitch, they’d just see dirty, stained pillow cases and wonder why I used them. 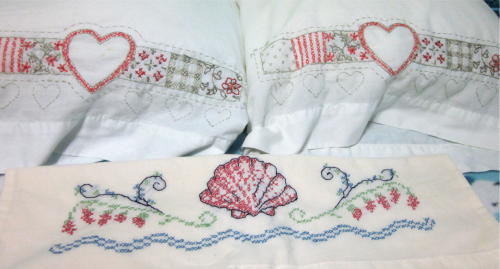 All in all, there were a total of three pillow cases – one set of hearts, and then one lone seashell pillow case. I will give DMC credit – all the thread held up against the washing machine I had to use to get the dirt off. First I washed them all using FabriCare from YarnTree, a product designed for use on museum embroideries to prevent damage to fabric and thread. But it really wasn’t effective on the pillow cases themselves – they were still stained and discolored. So I spot-sprayed the deep stains and washed them all again using a bleach alternative from Tide. That really seemed to help the colors and removed the smaller stains, although the heart set still has a few yellow spots here and there. And the thread held up with no color-bleeding or anything.

As you can see in the picture, I was able to save the heart pillow case set enough to use on my bed: the stains are small and barely noticeable and I have a hard time seeing the discoloration anymore. The real victim in this was the lone seashell case. I don’t know if you can see from the picture, but it’s discolored a deep yellow and it looks like the pink may have bled whenever the stamped ink was washed off. Which isn’t as bad because it’s mostly a uniform discoloration and it’s hard to notice the pink bled. But there’s only one pillow case, and to use it I needed a set – I have two sets of pillows and the case is too big to be used as a sham. I tried to find other ways to use it but I pretty much gave up and put it away.

But that’s where the story gets exciting! Several months later, I found myself in Joann’s going through their kits, when I found – wait for it – a kit for this exact same design! I stopped dead in the aisle and I’m fairly certain I let out an audible gasp of excitement that would’ve made people look if anyone else was in the aisle with me at the time. I pretty much bought it on the spot and got all the thread I needed, and it’s been what I’ve been working on the past couple of weeks! 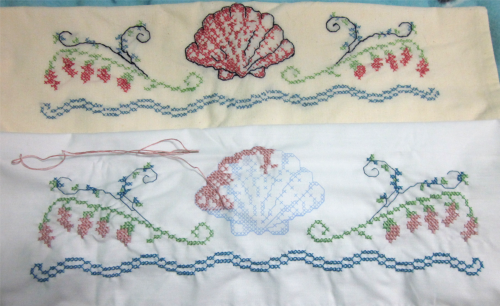 The old and the new side by side!

Of course, the kit comes with two pillow cases instead of one. Originally I wanted to stitch just one of the pillow cases and use the old and the new as one set and just toss the other in the kit, but… that was before I realized how discolored and different the original looks compared to the new one. I think DMC has changed their pink and blue colors since the original was stitched, as there’s a difference in their colors. At this point, I’ve decided I’m going to stitch both, use them both instead of the original, and turn the original into something else. Maybe cut it down and make a wall hanging or something instead, because there’s no way it can be used as a pillow case. Not in this condition, at least.

But I managed to salvage the pillow cases, and found a kit of the unusable one so I can make them for me to use – expect a Progress Report as well as a Friday Finishes on them over time! And this is the end of the first Salvaged Stash article.

So what did you think? Have you seen these before? Have you stitched something similar? Ever had to rescue embroidered pillow cases from the trash? Leave a comment below or head on over to our Facebook Page and join in the discussion!

Salvaged Stash is a series focused on rescued finishes and the story of how I received them. A lot of people don’t realize what happens to a lot of the treasured finished pieces once their makers have passed or the gift is given away or forgotten. I want to share my stories of the stash I’ve rescued and how I’ve used them. A companion series to the article Save the Stash from the Trash! Check back weekly for more articles.