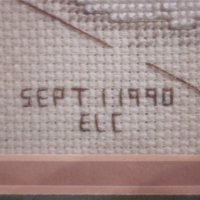 This is the one that was meant to be the first article, but I was so excited about the pillow cases I pushed this article to second instead of first. This piece is also what began my Save the Stash from the Trash mantra that sparked the whole ‘revolution’ that’s been going on with me in regards to that. So if you’re ready for an unbelievable origin story, then this is the perfect article for you!

Stitchers be warned: there is horrible stash abuse from non-stitchers in this. It may make you angry. I know I certainly was.

I believe I was in my second semester of my freshman year of college when this happened. I ended up moving in with my grandparents for school, because I couldn’t afford to live on campus and they practically lived down the street (versus my family’s house an hour away). I have lived in the country since I was seven years old, but my college and my grandparents’ home are both in the middle of a fairly large city. Huge culture shock, but suddenly I was surrounded by shopping and dining in a way I haven’t been before.

There were three stores down the street from my grandparents that also happened to be on my drive to and from school: a community thrift store and a Goodwill were next door to one another in the strip mall, and down the road across the street was an antique-style consignment shop called Yesterday’s Memories. Now, for the longest time I thought this store was closed down, because I never saw more than one car in the parking lot and it seemed to be run-down like no one was using it. But one day after I got out of class early I decided to stop by and see what it was supposed to be.

It turned out that the owners had only just moved into the building, but already the space was filled with all manner of things. The shop worked in a consignment style, where people could rent out a certain amount of space to sell their items. It was a lot like an indoor garage sale for dozens of people. I walked around and picked up some fabric and hoops I’d found, and talked to the owners for a good long while before I finished my shopping.

And that’s when I saw it. A fully finished, professionally framed cross-stitch piece by Paula Vaughan.

Now, before I explain how absolutely shocked and ecstatic I was to find this, I should explain a little bit about Paula Vaughan and her cross-stitch designs in case you don’t know much about her. Paula Vaughan is a famous artist well-known for her paintings on flowers, houses, and childhood activities. Her paintings are often converted into cross-stitch designs, and they are extremely popular. Odds are you have seen her designs before, even if you don’t know her name or what they’re called. (I know Leisure Arts releases leaflets on her flowers a lot; I saw one at Joann’s recently.)

Before I discovered cross-stitch groups on Facebook I was in cross-stitch groups on deviantART, and several people posted pictures of their Paula Vaughan finishes. I loved them, but I didn’t know what they were called or who the designer was at the time. Paula’s designs are so distinctive, though, that as soon as I saw this large, framed finish on the ground, I knew what it was instantly. 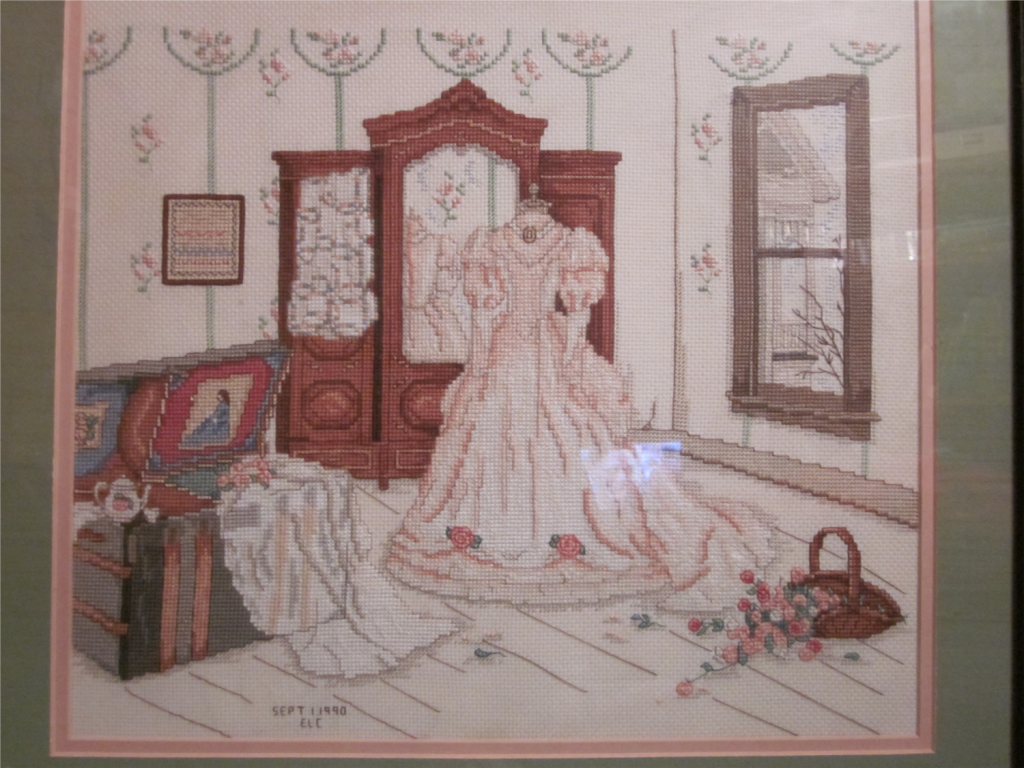 Paula Vaughan’s “Something Old, Something New” I rescued.

This finish is massive. When I first saw it, I knew that if I had stitched this it would take me years. Like at least five years, if not more. And I could tell it had been professionally framed: there’s a double matte you can see in the picture, but when you turn it over and look at the back, it’s covered in that paper that framers put on the back so you can’t see the back of the frame or the stuff inside, and the kind you have to rip open if you want to replace whatever is in the frame.

The price tag? $15 USD. $15 USD for a professionally framed Paula Vaughan finish. That is a lot for a poor college student, but I knew this piece was worth thousands of dollars both to myself and the person who stitched this, not a measly $15. I immediately picked it up.

While the owners were checking me out, I asked about the piece. Who was selling it? Why was it so cheap? The owner’s wife recognized the piece as well, even though neither of us could remember the designer. She told me this story: the people who rented out the space that I grabbed the finish from had a lot of crafty items in it, which were apparently all inherited. I don’t know from who; I’m guessing their mother or grandmother or some super crafty relative of theirs. And they didn’t know what to do with it. They just wanted rid of it all. The owner’s wife told me that whatever didn’t sell from their booth was supposed to be donated or thrown out.

So let’s step back for a minute. I’m sure all of the stitchers who are reading this raised their eyebrows and gasped at that. But yes, you read it right: this beautiful Paula Vaughan piece, professionally framed for who knows how much money, stitched with an enormous amount of dedication and love, was slated to be thrown out if someone didn’t buy it. Seriously.

I was absolutely outraged. Here I am, instantly in love with this piece, and whoever had it before me would’ve thrown it in the trash if nobody bought it! Is this what happens when you give your stitching to someone as a gift, and they no longer want it? Is this what happens to all my stitching stuff if I die and no one wants to take it? Who in this world would look at this hand-crafted work of art and say ‘if I can’t sell this I’m throwing it away’? Who does that?

This, folks, is why I’m so passionate about Saving the Stash from the Trash. I ran home and wrote the article within the week. It’s a popular article, but I still don’t feel people understand that this actually happens. One day, that piece you spent years working on may end up in the trash because of non-crafty people seeing zero value in it. It’s mind-blowing for us, but for them, our finishes aren’t worth more than $15.

I hung this finished piece above my bed, and when I eventually moved home I hung it on my bedroom wall there, too. Trust me when I say this piece will never end up in the trash.

So what did you think? Have you seen these before? Have you stitched something similar? Ever had to rescue a finish like this from the trash? Leave a comment below or head on over to our Facebook Page and join in the discussion!