I’ve Been Bit By The Project Bug!

I saw a retweet from Mr. X-Stitch on my Twitter the other day for a chart on a nerdy take on a “Welcome Home” cross-stitch. It was a design by HappyStitchNet on Etsy and is a CSS style code. When I saw it, I immediately had to have it. Both my boyfriend and I are nerdy people who dabble in code – he has a degree in Computer Science, in fact – and it was one of those unique pieces I wanted to get and stitch for our home. Those who know me know I only very rarely stitch charts, so it must be a rare thing to attract me to something that’s not a kit!

I just had to have this! Home Sweet Home in CSS by HappyStitchNet. Purchase this here.

After I bought it, I found another chart by HappyStitchNet of an HTML mock-up of a website called HTML Welcome Sign. I just had to have that one as well! So I bought them both and printed out the charts and decided to kit them both up.

Then, I stumbled across an old freebie in my Free Charts folder from Birdie Stitching. I’ve followed her blog for years and I’ve saved a lot of her Pokemon charts to eventually stitch, but I haven’t actually stitched any of them. So when I found this Luvdisc Chart in my folder I decided I might as well add it to my pile of charts that I was suddenly accumulating. I printed it off as well.

Last but not least, I found a picture that I wanted to cross-stitch. I saw someone had stitched it and wanted to stitch it myself. It’s the well known “Push Button Receive Bacon” picture:

I think this was converted into a cross-stitch chart at one point? I found a Folksy store and an Etsy store that claimed to have sold the chart at some point, but they were both no longer available. I don’t know whether it’s safe to chart the image myself, but I did! I couldn’t find who owned the image, if anyone; I think it’s just a meme based on the images on a hand dryer. It’s for personal use anyway so I’m covered if there is some sort of copyright on the image.

I hand-charted a pattern based on the image, changed the spacing on the picture and the words at the bottom, and then printed that out as well. I went from having no charts to do to having 4 charts to do in about an hour. I’ve clearly been bit by the Project Bug! I’ve got a whole pile of projects to do already, I really shouldn’t have added more to the pile.

I sat down and looked at all these charts I now owned. What should I do with all these? And then I realized: my boyfriend’s birthday was coming up. The Bacon chart was expressly for him, but the rest I could do for him as well. I have roughly two months before his birthday to stitch all four charts. So I could stitch them for him! It would be motivation to get them done now and not five years from now.

Only problem: I had exactly two of the required colors for all four charts. I had DMC 310 (black), and I had B5200 (White). Out of 15 some colors, I had two. So I had to make an emergency run to Michael’s to get the thread I needed! I also got a package of needles and 18 ct. Aida in both white and off-white… couldn’t decide what I wanted to go with at the time. (I went with off-white.)

I think this is the most projects I’ve kitted up all at the same time, but I’m happy the Project Bug is here! 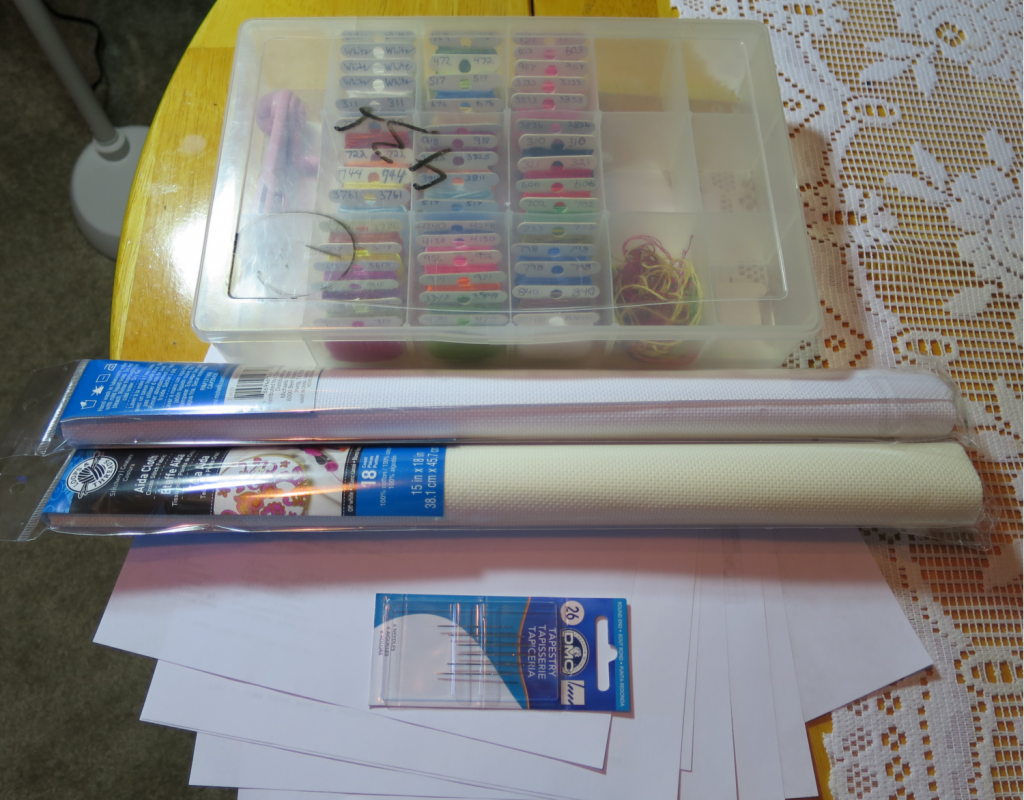 My projects all kitted up!