Welcome to the next Salvaged Stash article!

My mother taught me how to cross-stitch. When she was in her teens up through her early twenties when I was born, she used to stitch quite frequently. She taught me when I was eight years old, but it wasn’t until I was in my late teens that I realized just how many finished pieces adorned the walls of my childhood home. I suddenly realized the pictures I looked at every day for years were actually delicately worked with needle and thread, and I didn’t even notice.

When I was seventeen, I began to really get into cross-stitch on a more serious level. I built up my stash, bought more projects, designated a little craft area in my room… cross-stitch expanded beyond a hobby into a serious passion of mine. I talked to her about her stitching: did she still have anything left from back then? My mother went into her closet and pulled out an old bowling bag she hadn’t touched in years and gave it to me. That brown bowling bag and a flat tan box underneath it were all that remained from her years of stitching.

I expected to find needles, thread, old fabric, maybe a handful of old booklets and magazines that I knew she had. Imagine my surprise to find at least a dozen half-started projects! Some of them were only just started, some of them were half-finished, and one specifically was so close to being finished it must have only had around 50 stitches to go with all the backstitch already finished. 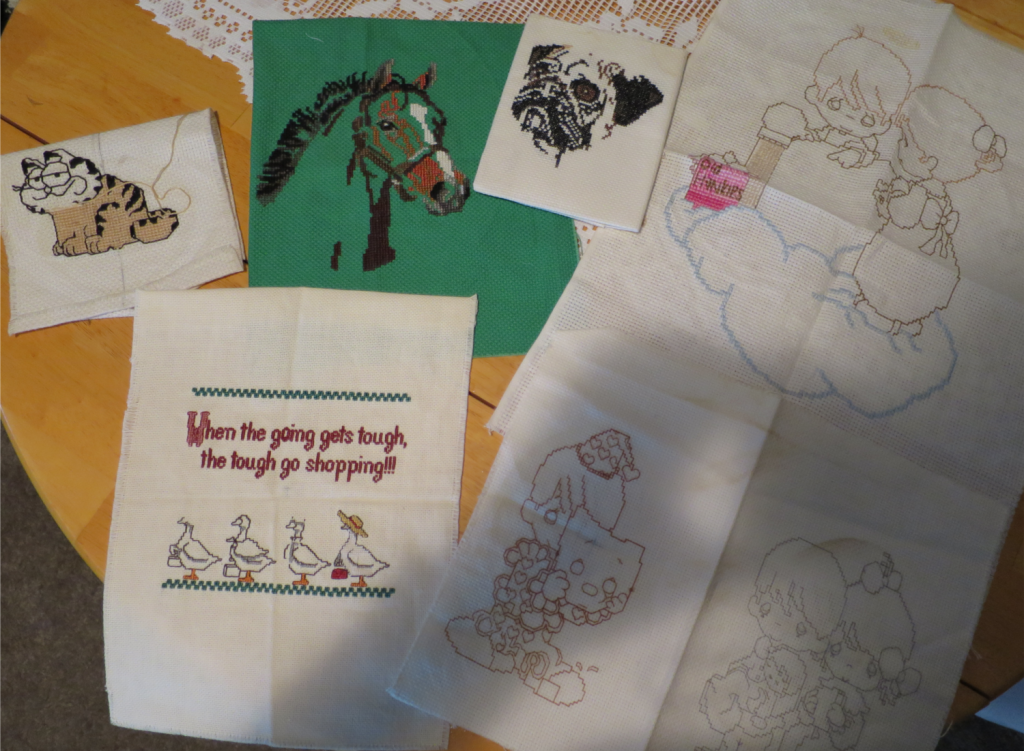 A handful of my mother’s UFOs.

Back then I was shocked to see them all, but now I can think on it and laugh. I’ve got a whole box full of projects I started and put down, way more than I found in Mom’s bowling bag. I do plan on finishing them all eventually, and I’m sure she had the same intention. She put the needle down to have kids and raise a family and the projects got lost in the whirlwind of life.

Unlike projects one may find in a thrift store or in a bundle of other things, my mother kept all her work mostly together. I’ve been able to find their charts in booklets or magazines, and have put the projects away in my binder for consideration. Maybe I’ll finish a few of the nearly completed ones and give them to her as gifts. There are a few charts she marked down as ones she would like to do but they were never started. Some projects had stains on the fabric that I could try to get out and clean up and finish for her.

I’ve completed one of those projects so far. The piece “Met My Dad?” was so close to being finished, I sat down one day and finished it for her. I washed it, got out the stains and the wrinkles as best I could, and then framed it for her. This is how it looked before the ironing and the framing: 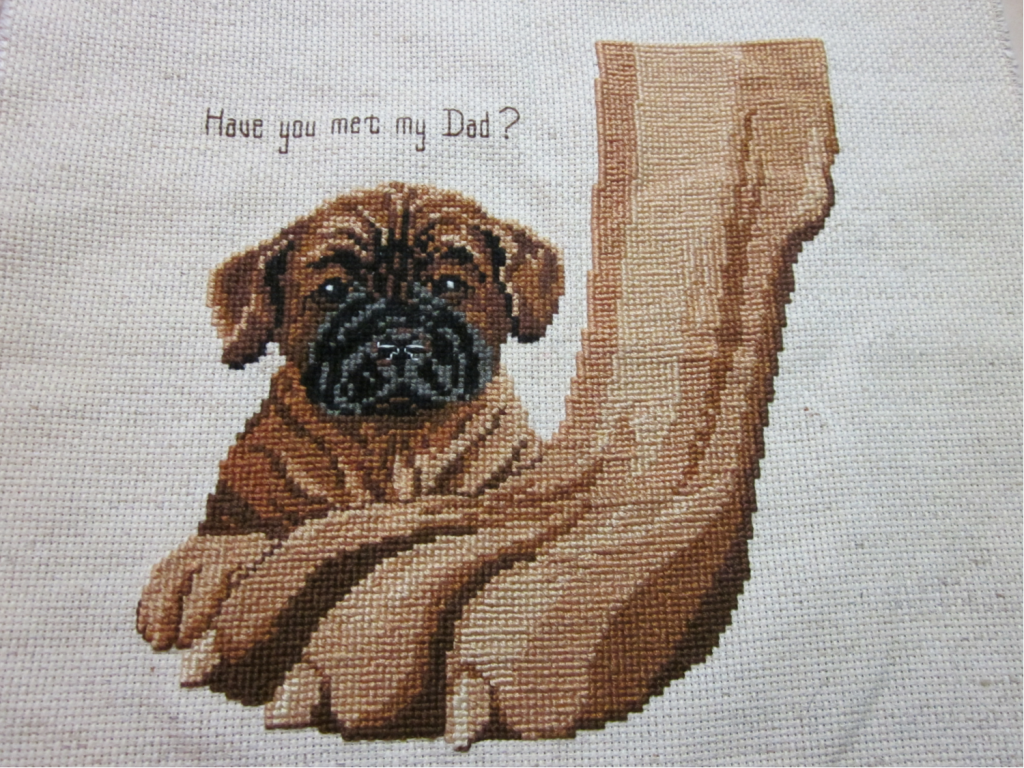 Here it is, just completed!

I sometimes wonder what would have happened had my mother not kept any of these things when she decided to give up cross-stitch. The half-started pieces probably would have been thrown away if their charts weren’t paired with them. I’m glad she kept them. These pieces in particular hold more sentimental value for the fact that they are my mother’s projects. Projects that have crossed more than twenty years to come to me to finish and hang them up on the wall. There’s something magical in that. Two generations worked on this project.

Much better than ending up in some landfill somewhere, don’t you think?