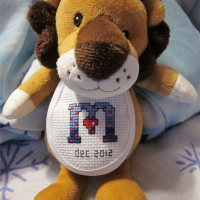 Today’s Friday Finishes is a stuffed animal with a stitched bib I stitched for my nephew last Christmas!

Designed by: The stuffed animal came with free charts, but they aren’t credited besides “free designs included”, so they may have been made for this kit.

Distributed as a kit by Michaels Store, Inc. The product was specifically made for them.

The Story: My boyfriend’s nephew was born in March of 2012, so I wanted to make him a present for his first Christmas. At the time, my boyfriend and I went to college down the road from a strip mall that had a Joann’s AND a Michael’s. I’ve never been to Michael’s before, so we made a trip there to explore what they had and find a present I could make for our nephew.

The store was pretty small, and it was absolutely crammed with all manner of crafty things. We eventually made our way over to the cross-stitch section on the other side of the store and I browsed the selection of kits, charts, thread, and other accessories they had. (That’s the nice thing about being close to a Joann’s, Michael’s, and Hobby Lobby, they all carry vastly different inventory.)

We found these adorable little stuffed animals with bibs you could stitch on, and they had three animals to choose from, lion and two others I can’t remember. I’ve learned since then that the other craft chains Joann’s and Hobby Lobby also carry three different animals, so there are nine different ones out there. But I didn’t at the time, so I went with the lion. I thought he would enjoy that the most out of what Michael’s had.

Time To Complete: About a day!

Review: The charts that came with the lion weren’t organized very well, so I had a really hard time reading the charts and I eventually gave up trying to use them. Instead, I found a lettering book that I also bought in Michael’s and picked out a good one to stitch the first letter of his name instead. I vaguely remember that it was very close to Christmas before I got around to stitching it (procrastination was definitely involved) so I only had a few short days to get it done. Luckily this lettering was very simple and there were only a few colors so it only took me around a half a day to a day to get it all done.

I did stitch pretty much non-stop to get it done, when I should’ve taken breaks, so I was really sore and tired from all the stitching when I got done! And I even missed a little bit of backstitch, though you can’t see it now. The heart was supposed to be dropped down over the letter with a string of backstitch, but it just looks like the heart was meant to be there so it wasn’t a big deal! 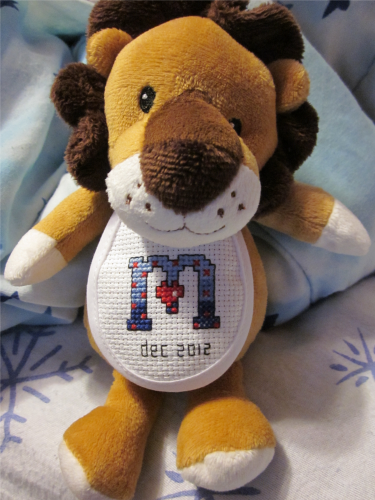 Final Verdict: My nephew (and his parents!) loved the lion and the stitching on it (the parents appreciated the stitching more than the nephew but he did like the stuffed animal)! He plays with it sometimes, but it’s mostly kept as a keepsake for his first Christmas. 🙂