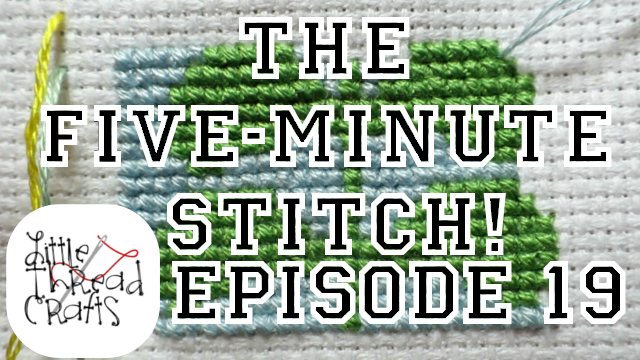 Welcome to Episode Nineteen of The Five-Minute Stitch!

I explain why there were no videos for another week as well as go over parking, since a viewer asked me to do so. Not a lot of stitching done in this episode but we will get more done over the next few days!

END_OF_DOCUMENT_TOKEN_TO_BE_REPLACED 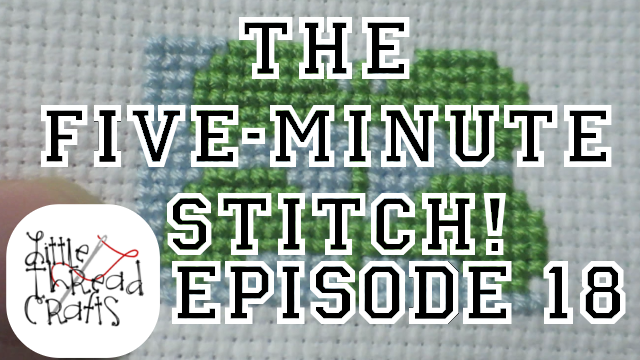 Welcome to Episode Eighteen of The Five-Minute Stitch!

I discuss the difference between aida and other fabrics and how Term of the Week articles will come back soon! Also tell me how to pronounce Aida please.

END_OF_DOCUMENT_TOKEN_TO_BE_REPLACED 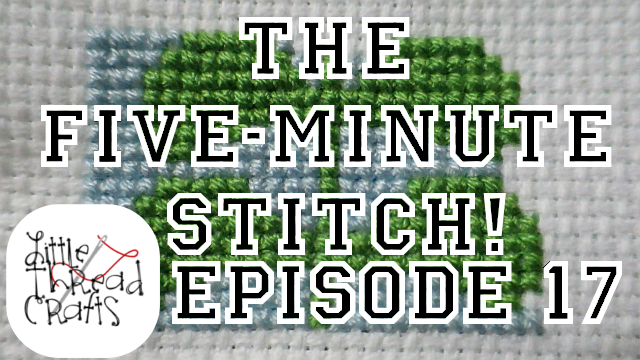 Welcome to Episode Seventeen! of The Five-Minute Stitch!

I spend more than half the video asking how to thread a needle. If you know how I’m supposed to thread this needle, please let me know!

END_OF_DOCUMENT_TOKEN_TO_BE_REPLACED

Someone aptly told me when I started this blog nearly a year and a half ago that cross-stitch was a “gateway craft”. And boy were they right!

I’ve been stitching since I was eight years old… which is about twelve years ago now. I’ve known since then that I love needle and thread – it’s art in a way I can do, create a masterpiece that can last for generations in a skill thousands of years old. People have sewed since (if not before) they picked up paint and made cave art. And I was always lousy with a pencil or a brush. I’m the type who always perfectly visualizes how a project should be, but don’t have the skills to execute. I’m waiting for the day when you can 3D print things with your mind! That’ll be great!

But in saying that, cross stitch is just one type of needlework. Historians believe it to be one of the oldest, but there are at least a dozen other forms one can take independent of all the others. Embroidery has so many different stitches and so many different techniques, and then there’s knitting, crochet, sewing in general… I know a lot about cross stitch and very little about everything else.

But I want to learn! I enjoy everything about the art of needlework, and when I hit a wall with one project it would be great to say “I guess I’ll go knit this instead!” It’d be fun to be a Jack of all (needlework) Trades. A “Stitching Guru”, so to speak.

The one thing holding me back? Time and space. Time is an obvious one, we never have enough time, but it’s also easy to fix – you make time when you need it. Note to self: if you don’t check Facebook every five minutes you’ll free a lot of time in your day. Space is my only major concern. Why? Well, stash of course! I know from my cross-stitch experience that if I get into a new craft, I’ll want all the goodies. The fabric, the kits, the yarn, the extra bits and bobs, all the pretty things… I’ve already got four boxes worth of kits and two boxes worth of charts and magazines for cross-stitch, and I’m struggling with space as it is! Imagine if I added all the supplies for knitting and crochet and sewing onto that?

Maybe it should be more motivation to stitch and clear up more room in my stash.

Or maybe I should just get a bigger house. 😉 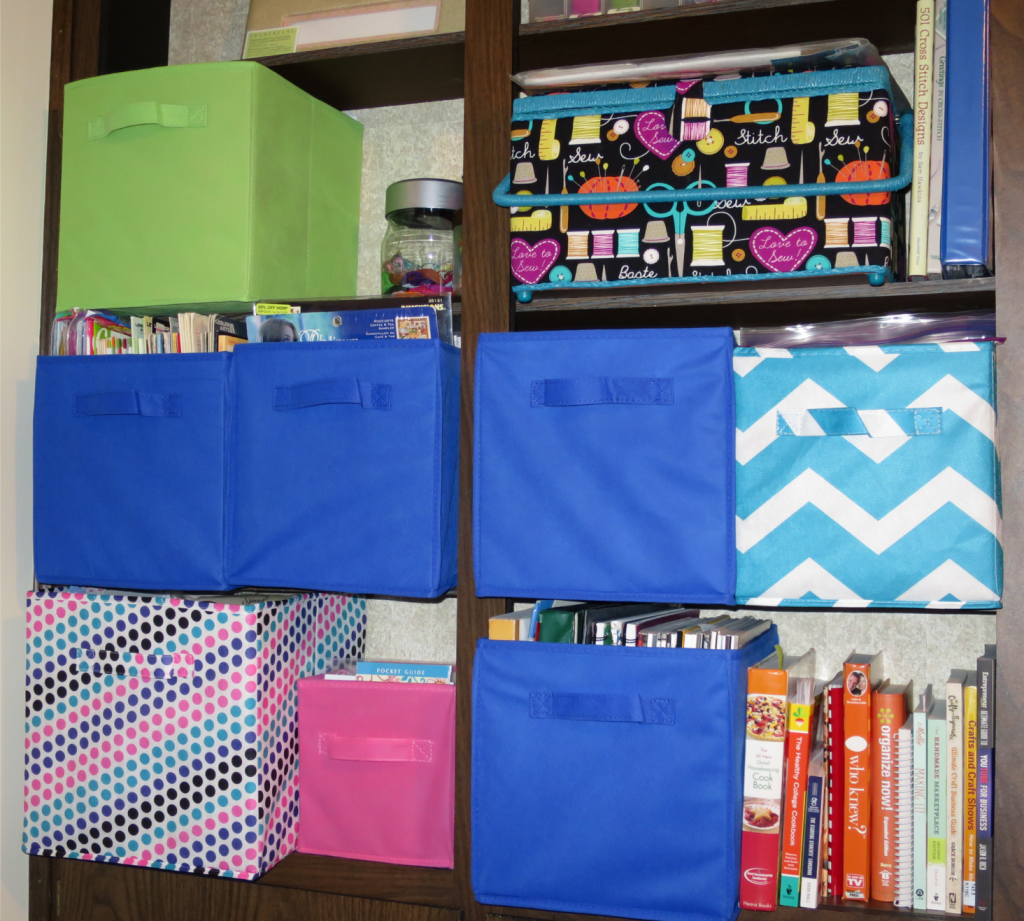 The Mystery of the Love Bug

I have come across a curious thing in recent months.

As readers may know, I do a segment on my blog called Friday Finishes, which is where I describe and outline all of the cross stitch pieces I’ve finished. The second finish I EVER completed was a piece called the Love Bug, which you can read about here: Friday Finishes #2: Love Bug. 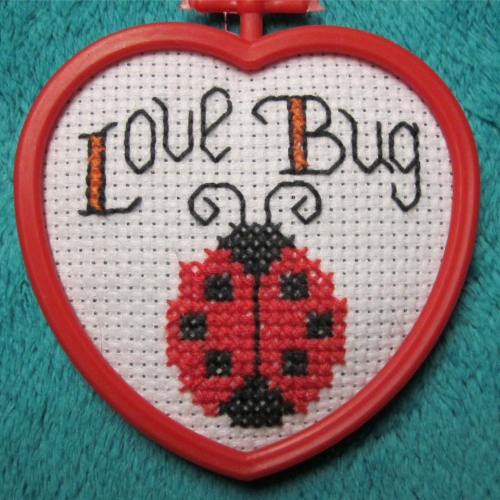 And then, around six years later, I found another, newly designed version of the same kit. I bought it and stitched it, and it became Friday Finishes #11: Love Bug 2012. 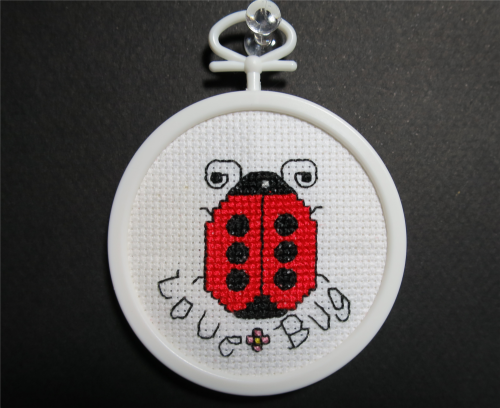 Now, these kits were not distributed by the same people. The original was NeedleMagic, Inc., and the newer one was Janlynn. I figured one bought the design from the other or perhaps the designer sold the design to both companies. They aren’t the same kit and separated by at least six years, if not more, but you can tell they’re the same motif. A lady bug with the words “Love Bug” make the two kits very similar.

And then, I recently bought a bunch of things on a trip to Hobby Lobby, and lo and behold, look what I found:

Once again, a kit by a totally different company, Artiste, with a lady bug and the words “love bug”. Called the exact same thing as the other kits. This is starting to get eerie now. And I know there has been at least one time prior that I went to Hobby Lobby and found a kit called “Love Bug” that wasn’t any of the above three. Plus, I found a fabric at work with lady bugs and “love bug” written on it!

Is the “Love Bug” design a super common motif that I don’t know about? Or is this design silently creeping into kits of all shapes and sizes?

Not that I mind. I personally love this motif and I get excited every time I see a new version of the kit I did as a child.

Have you seen this design before? Do you own one of these designs, or ones not even shown here? Do you know why there are so many different versions of this piece? Leave a comment and let me know!

I got a lot of stitching done today! Or at least it felt like it. I mostly filled in areas today so the fabric looks a lot fuller than it did yesterday.

Here is where we finished yesterday:

END_OF_DOCUMENT_TOKEN_TO_BE_REPLACED

I didn’t have nearly as much time today to stitch as I thought I would… I went and spent some time at my mom’s helping her clean house so we can sell some stuff on ebay and the likes. I thought I would have more time to stitch when I got home but I overworked my wrist and I’m now in some serious pain so I need to rest rather than stitch. I did get twenty stitches or so done throughout the day so I don’t feel the day was a total waste!

Here is where we finished yesterday:

END_OF_DOCUMENT_TOKEN_TO_BE_REPLACED

It’s getting pretty late here so time to do the update for the 30 Day Project for today!

So here’s where we finished off yesterday: 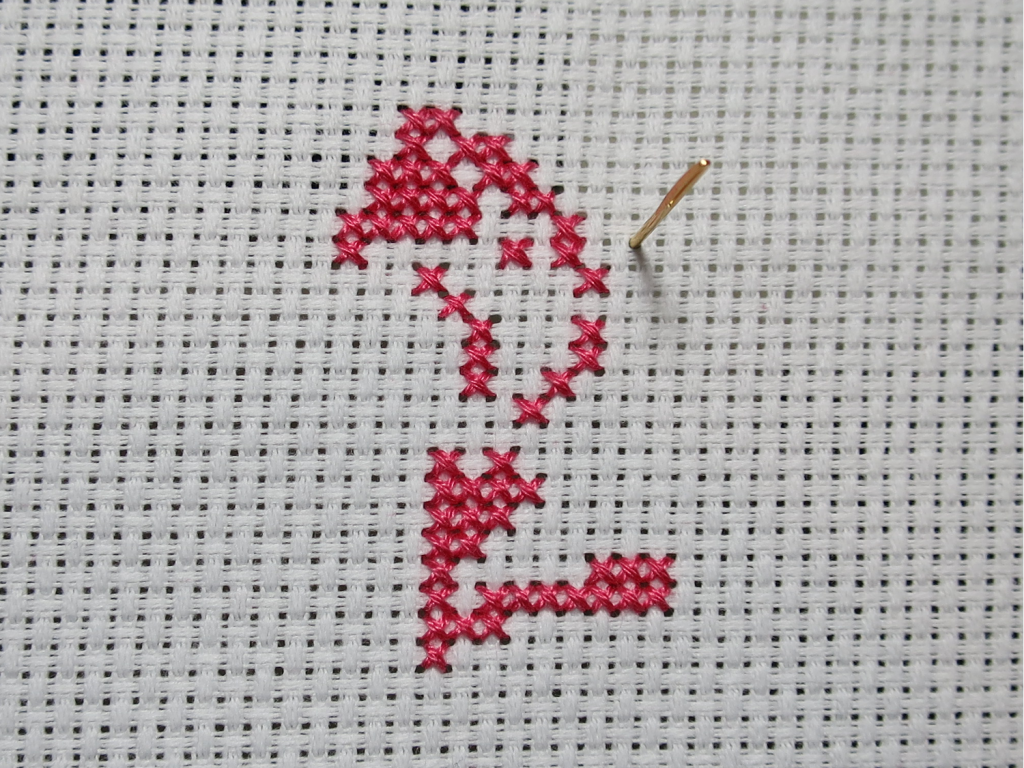 You can already see the sleeve on the dress taking shape, which is pretty neat!

END_OF_DOCUMENT_TOKEN_TO_BE_REPLACED

Well… on the one hand, the stitching on this chart has gone well, from the thirty or so stitches I’ve done so far. On the other hand, the fact that these threads came unsorted was a total nightmare.

Here is a picture of how the threads all came: 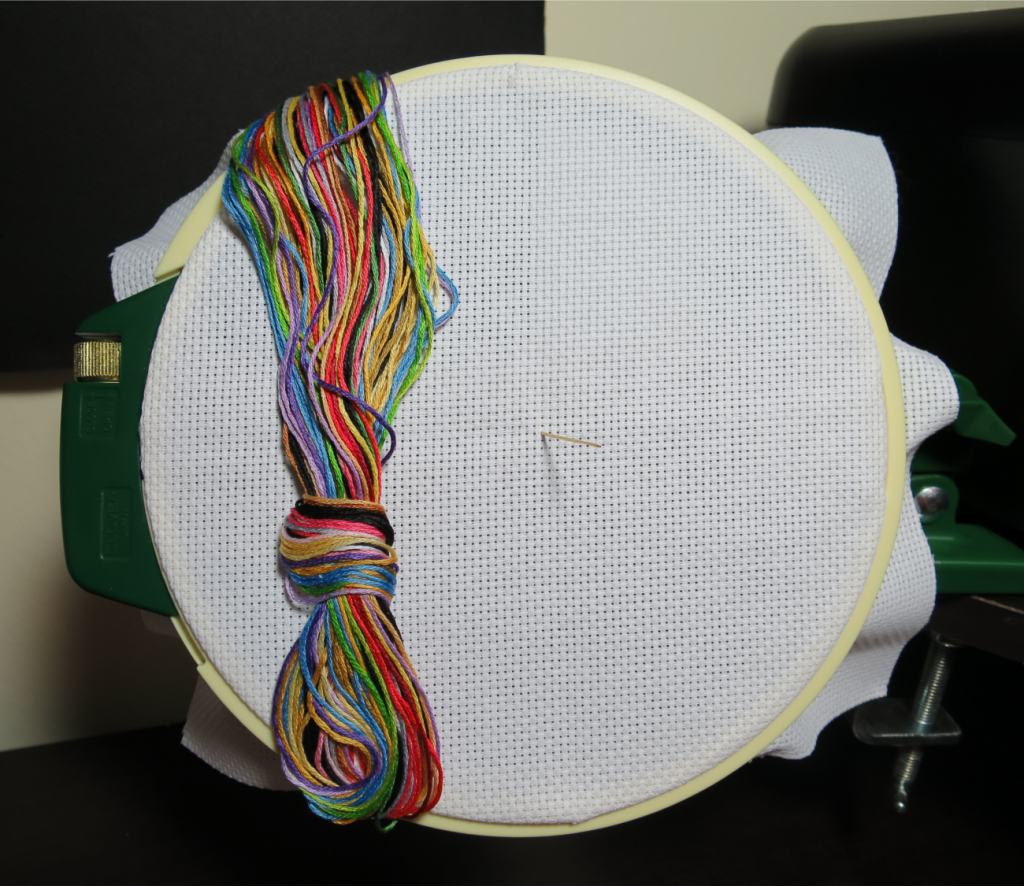 END_OF_DOCUMENT_TOKEN_TO_BE_REPLACED

Ooh boy, I picked a doozy for the month of November.

I had such a hard time choosing a project. I went through my kits over and over again, pulling some out, putting them back, starting over. I had so many good ones I didn’t know which one I wanted to do! And I have so many projects already started – not to mention Christmas presents to stitch (I don’t even want to think about Christmas) – I wondered whether I should even start a new one or work on one that’s already in my WIP pile?

Well I eventually settled on a Joan Elliot kit distributed by DesignWorks: 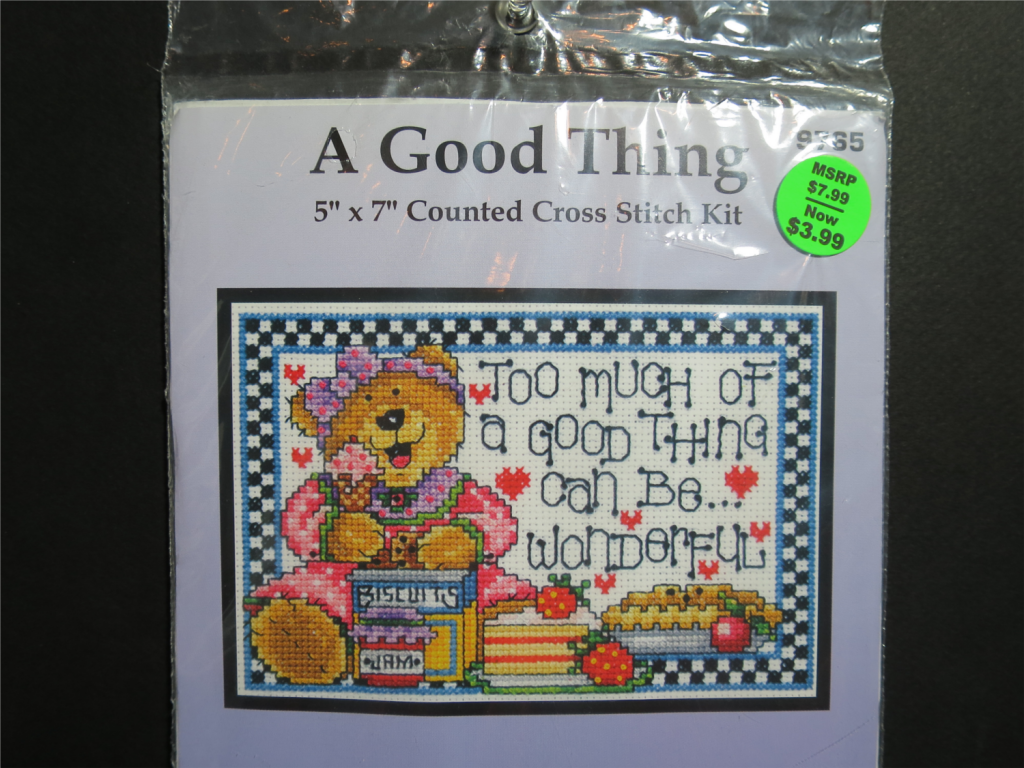 It’s a 5 x 7 so still manageable, it has some of my favorite themes of bears and food, and when it’s finished I can hang it on the wall of my kitchen.

I opened the kit and went to get everything started… switched out the packaged needle for a gold-plated one, got the fabric in a hoop, and then went to look at the chart.

The chart is not… fabulous. To be honest, it’s one of the worst-looking charts I’ve ever had come in a kit. I don’t mean that it’s hard to follow or badly-designed, it’s actually very well designed, but when DesignWorks went to package this kit I don’t know what they were thinking when it came to the chart? It looks like someone photo-copied the original chart and then scanned it into a computer and printed it out again from a regular printer. In other words, it looks like a very bad photocopy and not what I would expect from an official kit.

It’s not so horrible I can’t follow the chart… I’ll just definitely have to mark my place with my highlighter and a working copy is NOT an option – it’s only going to make the chart even harder to read. So I may have set myself up for failure on this one, but too late now! It’s in the hoop and ready to go and it’s already November 1st. No going back now!

It took me so long to pick a project I don’t really have that much time left to stitch today… expect the first real update to come tomorrow!