Term of the Week: Confetti Stitching 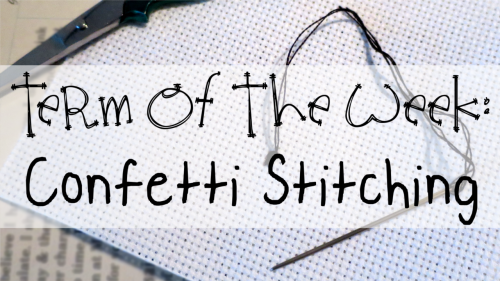 So, what is Confetti Stitching? No, it’s not a specific technique or a different kind of stitch!

First let’s look at the actual definition for confetti, courtesy of Dictionary.Reference.com:

Confetti
( used with a singular verb ) small bits of paper, usually colored, thrown or dropped from a height to enhance the gaiety of a festive event, as a parade, wedding, or New Year’s Eve party. 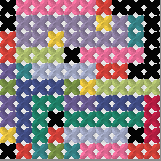 An example of confetti.

So that’s what confetti actually is, but what’s confetti stitching? Well, it’s a similar thing. Confetti Stitching is having a bunch of different colors in one area, usually a 10 by 10 square. It’s called confetti due to the stitches looking like the small bits of colored paper once you’ve finished the area.

Most stitchers hate confetti stitching because it’s difficult to keep your stitching neat when you have to carry your thread all over the place. Starting and stopping your thread can be difficult as well. However some people love it!  It’s the beauty of cross-stitch – we all have different tastes and preferences.

How much confetti stitching do you usually do in a project? Do you like it? Do you hate it? Leave a comment below!