My first ever doomed project…

Today’s Progress Report actually has quite a story behind it. One that’s seven years in the making!

This project is actually the third cross-stitch piece I ever worked on. It would have been number three on Friday Finishes if I ever completed it. But… I didn’t. Ladies and gentlemen, welcome to my first UFO.

I picked up this project shortly after finishing Love Bug, so… I was around 11 or 12 years old? I wonder now if that’s why this project felt doomed from the start. This piece was far outside my usual skill level and complexity for projects, but I was in love with wolves so I wanted to do it anyway. Even now seven years after I put it aside I can remember a lot of the problem that plagued me while I worked on it.

For starters, I had some bizarre idea that I was supposed to do the symbol key in order. As in start at the top of the symbol key and work my way down. To this day I could NOT tell you why I thought that. This was the first project I did where there were more than 4 or 5 colors, so… maybe with the first two projects they were just coincidentally in order and when I got to this one I thought that’s what I was supposed to do? The symbols were NOT in order in the least; one symbol could be as much as 50 stitches away from the one before it, so I would have to sit there and count it out.

And of course, the counting. Because I thought the symbol key had to be done in order, I had to do a lot of counting out from where I was to where I needed to be. And I was 12. I counted wrong, quite frequently. Sometimes I would lose count or lose my place and have to count dozens of times, so I started marking on the fabric with a permanent marker to help me count. I even marked on the thread itself. WHY DID I DO THESE THINGS.

The concept of frogging didn’t exist to me at all so if I messed up, I shrugged my shoulders and either stitched right over it or pretended it didn’t happen. I remember having a big problem of my thread getting tangled and knotted and in an attempt to untangle it I pulled the thread so hard it snapped. If it didn’t snap it stretched the fabric and the holes in the aida went massive.

The last time I worked on this project was Spring Break when I was 13. I got a large chunk of it done too; I thought if I worked at that pace I would be finished within the year. And then I went and got second-degree rope burns on my hands and couldn’t stitch anymore. (It’s a long story.) I put the project away and didn’t work on it again. 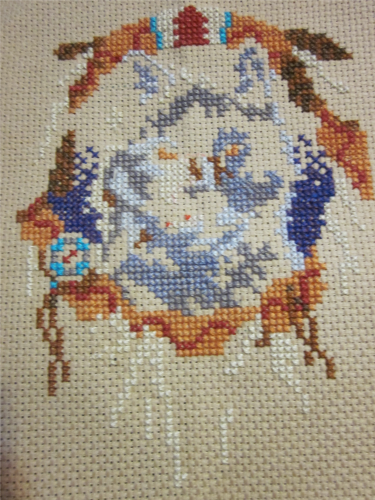 This is how it looked when I put it away for the last time.

Fast forward seven years to late May of 2013. I’m just starting into my Friday Finishes articles. As I said before, this project would be Friday Finishes #3, but I would need to actually finish it first. So I dug it out of my stitchy box for the first time in years to take a look at it.

It was a total mess. I knew pretty much from the beginning that there was no way I could continue work on the project the way it is. For one thing, the count is way off on the right hand side – like it’s off so bad I couldn’t find my place on the chart. There were permanent marks on the thread and on the fabric I wouldn’t be able to get off. To salvage this piece, I would need to cut out a lot of work I’d done and start over, but I couldn’t do that either. This was a kit, and I had already burned through a lot of the thread. 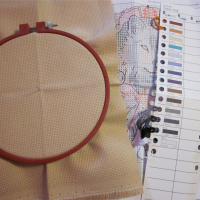 I still wanted to finish the kit. I wanted to see it done! I just couldn’t finish this one in particular. This kit has been out of print for years, so… I turned to eBay, bought an unopened kit of the same project, and started over.

This one is a little bit different from the one I had originally… it’s got a color chart, which is not something the original had, (or maybe it did, I marked on it with marker so I can’t really see the symbols underneath anymore) and for some reason the fabric is a little different. Same color and all, but the bottom is fringed and sectioned off like there’s supposed to be an extra portion of the design down there… but there isn’t? I’m not really sure why the fabric is like that.

And now, here it is, the re-done kit after about three weeks on and off of work: 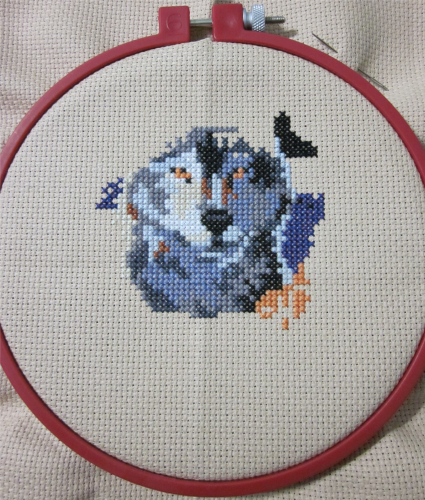 There you go! The story of my failure and then success of the Native Wolf kit. I plan on working on this as much as I can and finishing it soon, so I can finally add this project to my Friday Finishes after all these years! Until then, it’s still unfinished. I will keep everyone updated as I continue to work on this UFO-turned-WIP of mine!