Remember my Christmas Gift Fiasco last year? Remember the pieces I talked about on the Beary Kissmas Progress Report? Now look at the calendar and realize with some growing panic that Christmas 2014 is a month and a half away.

Oh wait, no, I should be the one doing that.

All joking aside, here I am almost a year later with a Progress Report on one of the only two Christmas presents I finished in time to give as gifts last year. One was the Beary Kissmas, mentioned above – that was a gift to my boyfriend (and technically myself) to hang on our baby Christmas tree – and the other is the subject of this article!

For my nephew’s first Christmas I bought a little lion plushie with a bib and stitched his first and last initial on it – which happens to both be ‘M’. You can read all about it and see the pictures on the Friday Finishes I wrote on it last year:

So, for Christmas 2013, I had the genius idea of doing it again! He was a little older now and he loved the lion I gave him. I found a bear version of the plushie somewhere (Joann’s, Hobby Lobby, Michael’s, and my local Wal-Mart all carry different ones and at this point I couldn’t tell you which ones I got from where, as I have several of the plushies now) and set about stitching on it.

This time, I wanted to go for something different. I had three plushies at that point and they all come with a handful of charts you can stitch onto the bib: an ice cream cone, a boat, those kinds of things. I went through and picked one out I thought he would like: it was an airplane on a cloud. There was enough room in the cloud for some back stitch, so I pulled out a pen and very roughly sketched out his nickname. It fit! I was excited and got straight to work.

The stitching went extremely fast – probably faster than the last one – so I didn’t take many pictures. It took me maybe two hours to finish, at most!

Here it is halfway done: 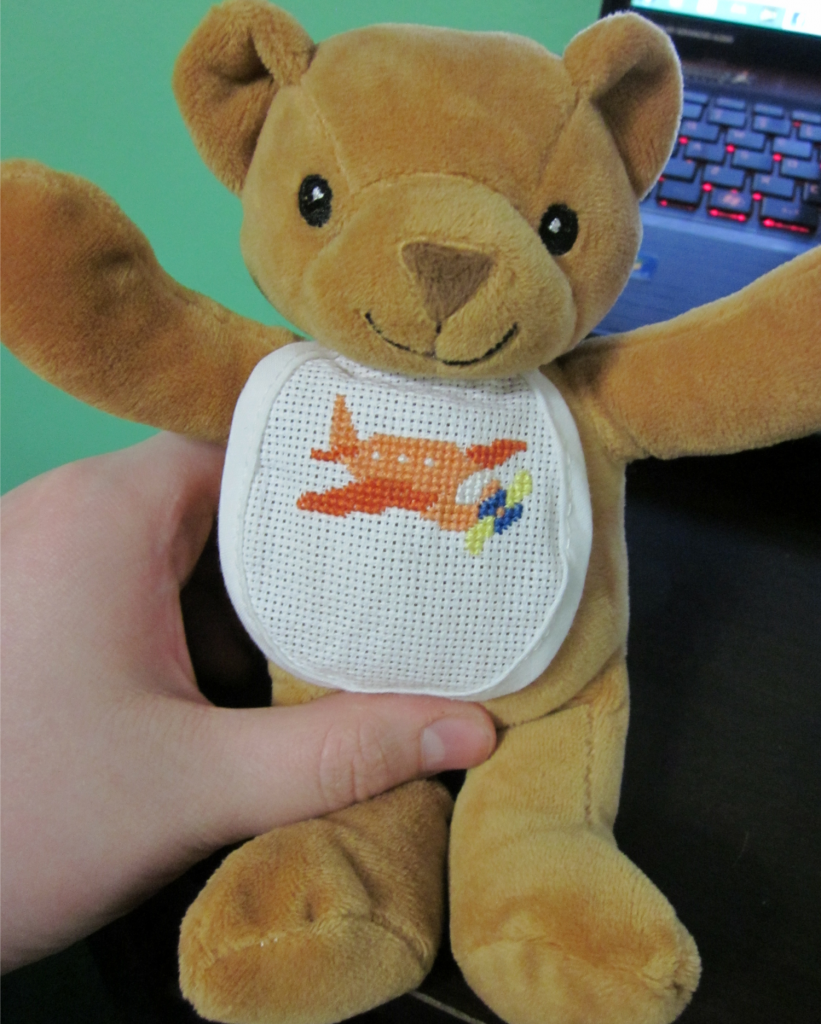 A picture of the full bear. I took a close-up of the stitching but it came out all blurry so this is a better view of it.

And then here it is all finished: cloud, backstitch, and added nickname and all!

I was very pleased with myself for how well it turned out!

I know I’m pretty much a year late, but there should be a Friday Finishes on this coming out this month, where you’ll get all the technical details on it.

As for whether or not I’m going to do this a third year in a row? Not planning on it! He loves playing with them but I think two is enough. I think I’ll just go to the store for something this year!